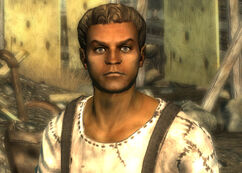 “We may not look it, but every one of us is a trained killer.”

An individual professing to have the abilities and the derring-do to handle any situation but with only limited hands-on knowledge and skills to back this up, Flash is nevertheless a likable guy. He is overconfident, prone to acts of thoughtless bravado, and enthusiastic about any forthcoming fracases.[1]

Growing up together in Little Lamplight, Flash, Pappy, Bittercup, Red and Kimba were close, and often played together. They also traveled as a group to Big Town. Flash was told by the other children of Lamplight that Big Town would be safe, and have plenty to eat; "Yeah, if you like eating bullets."

Flash is friends with the people at Big Town and is at a good standing with them. Flash was in a relationship with Bittercup for some time. He claims he believed a girl like her would be, "you know, more adventurous." However, she only talked about how much she hated everyone and how dark her clothes were. According to Flash, "A guy can only take so much of that before he snaps." Even Red had a negative outlook concerning their relationship; she believed that even though Flash "wasn't the smartest cookie in the jar," he deserved better than Bittercup. Flash has some sympathy for Pappy, who was also a former boyfriend of Bittercup, stating that he got the worst of it and appeared to become more depressed after their separation.

Flash hangs around Big Town doing what he can for the day.

Flash appears only in Fallout 3.

Occurrences of Flash being met just outside of Meresti trainyard have happened when the player fast travels there prior to going to Big Town (obviously before Big Trouble in Big Town). If spoken to, his dialogue consists of his usual complaints of Big Town and super mutants. Flash will proceed to walk back to Big Town via the road just outside the trainyard. If not escorted by the player there is a high chance of him being killed by super mutants or raiders during his journey.[verified]

Retrieved from "https://fallout.fandom.com/wiki/Flash_(Fallout_3)?oldid=3245797"
Community content is available under CC-BY-SA unless otherwise noted.