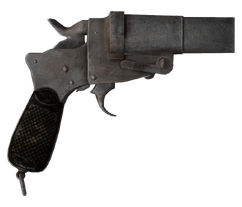 The flare gun is a weapon in the Fallout: New Vegas add-on Lonesome Road.

A short-barreled, breech-loading signal pistol which can also be used as a weapon. It launches its projectile in an arc, and can be used for long-range indirect fire when aimed outside of V.A.T.S. After damage caused by the initial hit, affected targets will take additional fire damage for a short time.

The flare gun also has the ability to frighten abomination-type creatures. While on fire, they will attempt to flee from the player, but will resume their normal behavior once extinguished. Note also that a fleeing creature may run right at and past the player if there is no other line of escape, but will not attack while on fire. The flare gun does not inflict much damage to them however, don't rely on it too much.

The flare gun is an improved holdout weapon.

The flare gun can fire a total of about 245 times, the equivalent of 245 reloads, from full condition before breaking.

The object effect is named "Burninate All the Peoples," a reference to Strong Bad's Trogdor song in Homestar Runner.[citation needed]