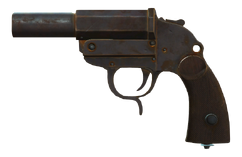 The flare gun is a weapon in Fallout 4.

The flare gun is a break-action single-shot weapon that is not designed to deal direct damage, but instead to summon nearby Minutemen for assistance using Flares. It can also attract nearby Brotherhood of Steel vertibirds. Firing a flare directly at an enemy will cause a small amount of damage, but virtually every other weapon will yield better results in the heat of battle.

The flare gun is unmodifiable, as it is likely not intended as a combat weapon, and is intended to be virtually exclusive to the use of signaling the Minutemen for assistance. It is poorly suited for lighting dark areas as the flare doesn't stick to a surface and has a time delay ignition.

The Sole Survivor is given the flare gun by Preston Garvey after completing the quest The First Step for the Commonwealth Minutemen.

Retrieved from "https://fallout.fandom.com/wiki/Flare_gun_(Fallout_4)?oldid=3358735"
Community content is available under CC-BY-SA unless otherwise noted.