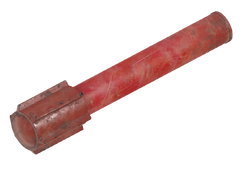 The flare is a weapon in the Fallout 76 update Wastelanders.

The flare is a thrown item that produces bright red light for 20 seconds. Unlike other thrown items, flares deal no damage when thrown at or near enemies. Flares may cause a small amount of stagger when thrown at an enemy.

As with other items only available after the main questline of Wastelanders, flares cannot be traded, dropped, or sold to vendors.

Flares can be crafted at a tinker's workbench if the corresponding plan is known. After the main questline of Wastelanders, the plan can be bought from Samuel for 50 gold bullion with a Settlers reputation of at least Cautious.

Retrieved from "https://fallout.fandom.com/wiki/Flare_(Wastelanders)?oldid=3233266"
Community content is available under CC-BY-SA unless otherwise noted.