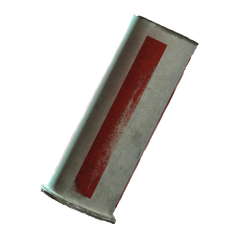 The flare is a type of ammunition in Fallout 4.

The flare is an ammo type that is specifically used in the Flare gun. The round has a familiar look of a shotgun shell but with red paint on the sides. As this is a type of ammo it has no weight.

Retrieved from "https://fallout.fandom.com/wiki/Flare_(Fallout_4)?oldid=2620745"
Community content is available under CC-BY-SA unless otherwise noted.