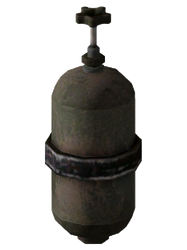 Flamer fuel is a type of ammunition in Fallout: New Vegas.

A mixture of petro-chemicals and other flammable compounds for use in specialty flamethrowers.

After use, there is a chance that the drained flamer fuel tank will be recovered and placed in the player character's inventory. Drained fuel tanks can then be recycled back into a usable tank at a workbench.

Note that although flamer fuel recipes that require the Vigilant Recycler perk have Science requirements, the Courier's Science skill must be at least 70 in order to acquire the perk itself.

Homemade flamer fuel is made from corn-based ingredients to produce an ethanol mixture combined with the flammable properties of detergent to create a deadly fuel mixture. Due to the crude nature of the fuel, homemade fuel severely stresses a flamer, degrading its condition three times as quickly. Every recipe yields 20 units of fuel. A Science skill of 50 is needed to produce the fuel.

Added in Gun Runners' Arsenal, this sub-type causes 30% more damage, provides some Damage Threshold negation, and weighs less than the standard flamer fuel. The only drawbacks are a slight (10%) increase in weapon degradation and increased fuel usage (it takes three regular units to produce two optimized ones). It requires Vigilant Recycler and can only be crafted at a workbench.

Optimized flamer fuel is the only way to get any Damage Threshold reduction out of any weapon using flamer fuel.