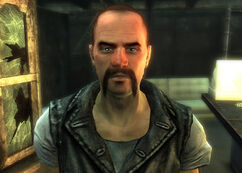 “I'm Flak. If you want something better than that peashooter, stop by Flak and Shrapnel's.”

Flak is a former slaver from Paradise Falls who now lives in Rivet City with his partner Shrapnel. Together they run the Flak 'N Shrapnel's weapons store in the marketplace in the year 2277.

Flak was born in 2227. Now aged 50, he is pretty gruff, but completely reformed from his early days of being a slaver and is an upstanding citizen of Rivet City. He spends his days in the shop with Shrapnel, occasionally taking a break to drink down at the Muddy Rudder. Flak still has a bit of the tough guy in his speech, but he's not as aggressive as Shrapnel. He really tries to tone it down when he's at the shop.[1]

Together with his partner Shrapnel, he runs the Flak 'N Shrapnel's weapons store in the marketplace. He can sell you ordnance and repair your weapons. Flak and Shrapnel share their store's inventory, so buying or selling from either one of them will update both of their stocks. This means that if Flak is enslaved by the player character for Paradise Falls, Flak 'N Shrapnel's in the marketplace will still be open. They consistently have a larger amount of caps than the other shops in Rivet City. After the market closes, he goes to the Muddy Rudder for a drink and heads off to his cabin to sleep afterward.

Strictly Business: Flak is one of four VIP targets that Grouse of Paradise Falls wants enslaved.

* The key is not actually obtainable. The game sets as a condition for obtaining it that Shrapnel be dead and Flak be dead or enslaved. Since Shrapnel is set as essential, he cannot die.

Flak appears only in Fallout 3.

Retrieved from "https://fallout.fandom.com/wiki/Flak?oldid=3443242"
Community content is available under CC-BY-SA unless otherwise noted.