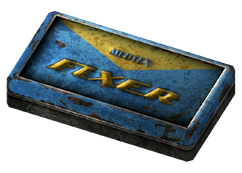 Fixer is a consumable item in Fallout: New Vegas.

This less recognized product was created by Med-Tek, for temporarily curing addictions. Despite the ability to combat addictions, the attempt to temporarily flush out the effects of addiction causes a side-effect of nausea, described further in the characteristics section below.

Fixer clears any addiction suffered by the player character. The addiction is negated and will not reoccur by itself, but it can always be reacquired by continued use of the drug that caused it. It also causes the Courier to "feel woozy," which produces a visual and auditory effect similar to having been poisoned that lasts for a short period of time. Roughly every 15 to 30 seconds, the player character's vision will blur and loud static noises will play, which can be a hindrance in combat if the player character is not prepared for it. The sound and visual effects are temporary.

Fixer only appears in Fallout: New Vegas and is referenced in Fallout 4.[1]

Retrieved from "https://fallout.fandom.com/wiki/Fixer?oldid=3279146"
Community content is available under CC-BY-SA unless otherwise noted.
... more about "Fixer"
RDF feed
Has platform
PC +, Playstation 3 +  and Xbox 360 +