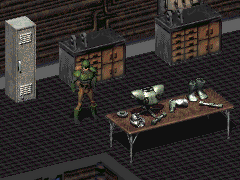 “Well, they've got more than enough up in the supply room, but Michael and his damn forms say that this particular suit isn't up to specs. Damn bureaucrats.”— Kyle

Fix the broken T-51b power armor is a side quest in Fallout.

Kyle, a Brotherhood of Steel Knight in the Lost Hills workshop, is trying to fix a suit of T-51b power armor. However, according to Michael, the equipment manager for the Brotherhood, this particular suit isn't up to specs anymore due to supposedly substandard soldering repair job done by Kyle, which means that Kyle can no longer get the part necessary to make it operational.

This is one of two ways to obtain a suit of power armor in the game, and the only one available to those with neutral or negative karma. To obtain the necessary small piece of machinery, there are two options:

Once the player has the part, Kyle will give them a repair manual and install the unit, although he will not fix it. The player character must have a Repair skill of at least 70% to succeed. If they do not and try repairing it anyway, then the threshold is increased to 100%. Once the check is met, all that's left is collecting the armor from the floor.

Retrieved from "https://fallout.fandom.com/wiki/Fix_the_broken_T-51b_power_armor?oldid=3404834"
Community content is available under CC-BY-SA unless otherwise noted.