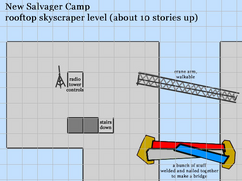 Fix the Radio Tower was going to be a quest in Van Buren, the canceled Fallout 3 by Black Isle Studios. It is located in Denver.

The Radio Tower's running erratically, partly because of the generator (see below), partly because its control system is messed up. It needs some repairs, but Wagner doesn't have the skill to do it.

Science Boy - Is needed to fix it.

Retrieved from "https://fallout.fandom.com/wiki/Fix_the_Radio_Tower?oldid=2284073"
Community content is available under CC-BY-SA unless otherwise noted.