400 XP
Ability to trade with the terminal

“If you can find some spare parts, maybe you can fix the damaged Shop-Tec trading computer.”— Quest description

Fix Damaged Shop-Tec is a quest in Fallout: Brotherhood of Steel. It is located in the Secret Vault - facilities 3.

After you get to Facilities One, head back to where the technician was to enter Facilities Three. You'll want to access the first shop-tec vending machine you see on this level. It will set you up with a quest to Fix the Damaged Shop-Tec. Move to the east after you're done. When you come to the end of the hallway head NW. Activate the computer core. This switches on some laser beams.

Head into the room that you just came from. In this room you will want to activate the computer console and make it turn off the laser gate. You're going to have to do some ducking and jumping when you get to the green lasers. Finally (after you're through), turn off the next set of lasers with the new console (you should be right next to it). Enter the room above and use the console to the east to shut down the lasers. Then use the one to the west. Do this until you get the lasers to the west turned off.

Head down there and continue on your path. Just between the flashing green lasers in the next area and keep circling around in a clockwise motion. Use another console in the next room to deactivate another set of lasers. While moving on you'll get trapped between two lasers. Don't panic, just kill all the robots that come by. Eventually the lasers will shut off and you'll be allowed to pass through.

Move to the north again and shut off the lasers in your path using another console. Do this in the next two rooms as well. You can find the Shop-Tec parts here. 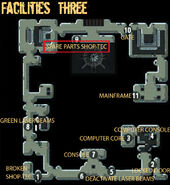 The parts for the broken shop-tec are here
Community content is available under CC-BY-SA unless otherwise noted.
Advertisement