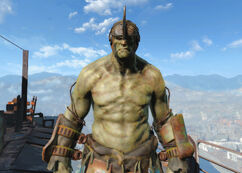 Fist is a super mutant in the Commonwealth in 2287.

Fist is the leader of the super mutants occupying Trinity Tower. He is holding Rex Goodman and Strong prisoner in a cell at the top of the tower. Should the Sole Survivor enter the tower and work their way up, he will continually taunt them over the intercom. Upon reaching the top of the tower, Fist can be found outside of the cell holding Rex Goodman and Strong.

Even if Fist is killed before reaching the top of the tower, such as being sniped or while riding in a vertibird, his voice can still be heard from the intercoms while ascending the tower.

Fist appears only in Fallout 4 and Fallout: Wasteland Warfare.

Retrieved from "https://fallout.fandom.com/wiki/Fist_(super_mutant)?oldid=3450146"
Community content is available under CC-BY-SA unless otherwise noted.