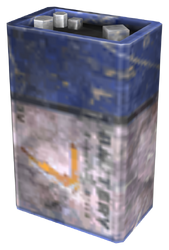 A fission battery is a miscellaneous item in Fallout 3 and Fallout: New Vegas.

The term "fission battery" seems to imply that the device's functionality is somehow linked to the process of nuclear fission, probably some form of alpha//betavoltaic cell or direct charging generator, which is used to generate electrical energy. Even though the exact workings of this item are never undergone, it demonstrates the pre-War American obsession with nuclear technologies replacing normal tech, as a means of evolution. As the batteries can often be found in robots, they seem to be their primary energy source, along with powering cars, alongside fusion cores.[1] After more than 200 years of inaction, some of the robots can be reactivated, demonstrating that the batteries are a very reliable form of energy storage. Nuclear energy has the potential to maintain a form for excessive amounts of time.

In the post-War society, the fission battery has taken on the role of an on-hand generator. Throughout the Mojave Wasteland, fission batteries can be found in New Vegas streets, remote shacks in the wastes, and reoccupied suburban homes. They are used for powering a wide range of devices like street lamps, electronic signs, lightbulbs, and other household appliances while being easily scavenged from the common robot or appliance store. This makes them invaluable to the common wastelander in the absence of a reliable power grid.

Fission batteries are located throughout the Capital Wasteland, the Pitt, Point Lookout and Adams Air Force Base, usually in toolboxes or destroyed robots.

Retrieved from "https://fallout.fandom.com/wiki/Fission_battery?oldid=3446531"
Community content is available under CC-BY-SA unless otherwise noted.