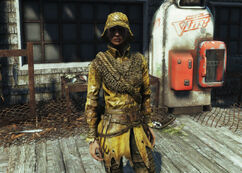 “The others think I'm nuts to be fishing this dock. But one day, the big one'll be mine. You'll see.”

Fishermen are two characters in Far Harbor in 2287.

Fishermen can be found wandering the docks of Far Harbor. They behave more or less the same as Harbormen, though they have different dialogue referring to their profession.

A male fisherman named Kye[1] with a unique voice and dialogue can be found outside The Last Plank at a table cutting fish and will remain there unless attacked. This fisherman provides several humorous anecdotes, including claiming that his family hails from Yorkshire (which seems likely given his British accent) and that he once snagged a mini nuke while fishing.

Fishermen appears only in the Fallout 4 add-on Far Harbor.

Retrieved from "https://fallout.fandom.com/wiki/Fisherman_(Far_Harbor)?oldid=3181654"
Community content is available under CC-BY-SA unless otherwise noted.