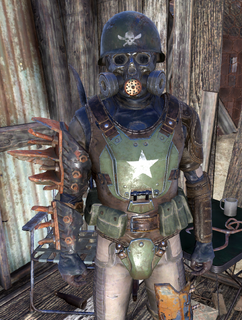 Fishbones, often nicknamed Bones and whose real name is Billy,[1] is the leader of the raider group at Ohio River Adventures in 2103.

Fishbones worked in an office before the Great War. He joined up with the raiders at some point and was present during the founding of the Crater. Although he helped build up the settlement, he was cast out and sent far away from the headquarters, as he believes the other raiders saw him as a threat to their leadership. They sent him to establish an outpost at Ohio River Adventures with Blackeye and Gills, where they could coordinate the trade of mirelurk products such as eggs and softshell meat.

While making the trip southwest, Bones woke up one night to Bruiser "beating the tar" out of Gills, who was on night watch. Bones figured that he had found Gills' replacement, as Gills could no longer walk from the beating he received. Bones, Bruiser, and Blackeye now lead the outpost, though they have recently been having troubles with mirelurks attacking the docks.

Fishbones occasionally needs help defending the water purifier from attacks by mirelurks. Doing so earns reputation with the Raiders.

Blackeye claims that Fishbones has a fixation with the letter "B."

Fishbones appears only in Fallout 76, introduced in the Wastelanders update.

Currently, the daily quest from Fishbones is bugged, in context for starting it after the first completion. One will need to ask him why he is there, and then talk about something else with him. After that, ask if he needs help to begin the daily quest. In addition to that, the conversation may be interrupted randomly and players will have to restart the entire dialogue multiple times to begin the daily quest.[verified]

Retrieved from "https://fallout.fandom.com/wiki/Fishbones?oldid=3342476"
Community content is available under CC-BY-SA unless otherwise noted.
... more about "Fishbones"
RDF feed
Has platform
PC +  and Playstation 4 +