Fish are creatures found in the Commonwealth and on the Island in 2287.

Before the war, toxicity levels had been steadily rising in fish specimens such as cod, reported by the Nahant Oceanological Society as more than 34% above those in control tanks.[1]

Fish survived the nuclear devastation of the Great War and are found in the Boston region. They are found deceased, washed up on shores near mirelurks and radgulls. In Boston, several fish packing plants are situated along the shore. Fish line the conveyor belts at the Mahkra Fishpacking plant and a fish is seen on the sign of Four Leaf fishpacking plant. A fisherman can be found outside of the Compound on the shore of Mystic Lake, across from Covenant. He will walk back and forth on the concrete pier above the entrance to the Compound and watches those coming and going.[2] He is not hostile but will complain to the Sole Survivor that they are scaring away the fish he is trying to catch.

At these locations, companions will make comments about the fish, including Danse, who wonders if fishing is even possible these days, as he has never done it before.[3] Deacon shares that fish are a good meal when prepared correctly, and MacCready says eating fish upsets his stomach.[4][5] Fish are also used in cliches, such as Piper Wright's reference to the player character as looking like "a fish out of water."[6]

Fish and fishing are a large part of the livelihood and culture of those living in Far Harbor. The Sole Survivor can purchase a unique weapon called The Fish Catcher, as well as find fishing poles, fish baskets, and racks scattered around the docks and island. The #5 issue of Islander's Almanac features fish recipes.[7]

There are two named fishermen the Sole Survivor can meet on the docks. One fisherman can be found outside The Last Plank at a table cutting fish, and will share that his family hails from Yorkshire and that he once snagged a mini nuke while fishing.[8] He also asks everyone to be quiet as he is trying to fish and will mention sea bass during the Captain's Feast.[9][10] The fisherwoman will suggest sweeping a Geiger counter on any fish that are caught, and may comment that the fish are not biting, or that mainlanders arriving have scared away all the fish.[11][12][13]

Fish are relatively the same size as before the war, with the addition of fleshy growths and sores on their sides.

Fish appear in Fallout 4 and its add-on Far Harbor. 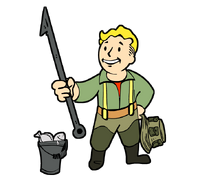 Fish in a bucket in The Great Hunt icon

Trapper feeding the fish at the Old Pond House

Fish in Echo Lake on the Island 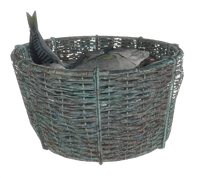 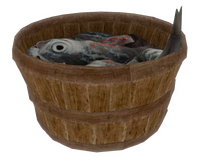