Fallout: New Vegas
Honest Hearts
“It's this slimy scaled thing; like a lakelurk, except no legs. Well most times. They're like birds, except they stay underwater.”— Cass

Fish are creatures found in the Mojave Wasteland.

Live fish can be observed swimming in bodies of water around the Mojave. They cannot be interacted with.

A fish in Lake Mead

A school of fish in Lake Mead

Fish in the Virgin River 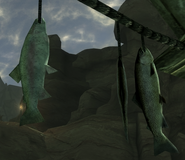 Fish left to dry out in Honest Hearts 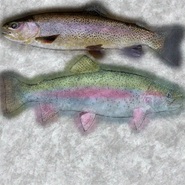