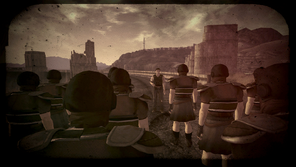 The First Battle of Hoover Dam is the name applied to the first offensive mounted by Caesar's Legion against New California Republic forces entrenched at Hoover Dam in 2277. It was one of the turning points of the NCR-Legion War.

Prior to the establishment of the NCR military in the Mojave Wasteland, NCR scouts had reported that the Hoover Dam was more or less intact and completely capable of producing more than enough power for the whole of the NCR. As the soldiers began to pour in, Mr. House was able to secure the New Vegas treaty and prevent hostilities between most of the tribes in the region and the NCR.

Caesar's Legion, having met virtually no resistance so far in their conquest, saw the Dam as a strategic asset and river crossing. With it, they would take control of New Vegas, and Caesar would finally have his Rome. But in the NCR, he had found his Carthage.

“At the Battle of Hoover Dam, the tide turned for the NCR when Rangers and 1st Recon sharpshooters lured Caesar's soldier into the booby-trapped ruins of Boulder City.”— Loading screen

The NCR was unprepared for the assault, and the Malpais Legate initially had the upper hand, able to swarm NCR defenders over the Dam. Lead elements of the NCR, including members of the 1st Recon Battalion and NCR Rangers, executed a tactical retreat west across the dam and into Boulder City while using their prowess in marksmanship to pick off the Legion centurions. The Legate, unable to adapt strategies in combat, ordered his legionaries to pursue the rangers. He did not realize the NCR had booby-trapped the city by laying explosives along their line of retreat and were drawing the Legion into a trap. When the Legion forces entered the city, the NCR detonated the explosives. This inflicted severe casualties on the Legion forces and crippled their offensive. NCR forces counter-attacked and eventually routed the Legionaries who fled east back over the dam.

Following the battle, the NCR soldiers retook the Dam and began making preparations for the inevitable Legion counter-attack. A memorial to the soldiers and Rangers lost in the battle was erected outside of the ruins of Boulder City.

Caesar ordered his Legate's execution for his incompetence in the battle. He was coated in pitch, lit on fire, and tossed into the Grand Canyon by the Praetorian Guard, setting an example for others. Some Legionaries believe the old Legate still lives on as The Burned Man.

Retrieved from "https://fallout.fandom.com/wiki/First_Battle_of_Hoover_Dam?oldid=3245429"
Community content is available under CC-BY-SA unless otherwise noted.