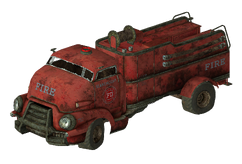 The firetruck is a vehicle in Fallout: New Vegas.

Firetrucks are pre-War vehicles used in emergencies to stop fires or execute other rescue missions. They are capable of holding a squadron of firemen to their destination while possessing a large fire hose that could be connected to a fire hydrant on the sidewalk to access a quantity of water. All firetrucks come in a red color with large printed words of "FIRE" on the sides and front of the truck, though all firetruck vehicles are unusable and cannot be interacted with.

Strangely, all firetrucks in Lonesome Road have a Searchlight Fire Department logo on the side. This is likely an oversight by the developers.

Retrieved from "https://fallout.fandom.com/wiki/Firetruck?oldid=3099479"
Community content is available under CC-BY-SA unless otherwise noted.