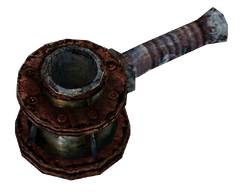 The firehose nozzle is a component used in the construction of the Rock-It Launcher in Fallout 3. In Fallout: New Vegas it serves as an item needed for the unmarked quest Not Worth a Hill of Corn and Beans.

They are common, and generally found in large, red firehose boxes.

They are fairly common, and are found in firehose boxes in buildings all over the Mojave Wasteland.

Retrieved from "https://fallout.fandom.com/wiki/Firehose_nozzle?oldid=3132219"
Community content is available under CC-BY-SA unless otherwise noted.