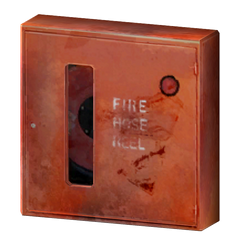 Firehose box is a common type of container in Fallout 3 and Fallout: New Vegas. Before the bombs fell, these boxes held hoses that were connected to highly pressured water to be used to extinguish fires in the case of an emergency. It seems that the hoses themselves have all been destroyed, either by the effects of the bomb, or by the ravages of time during the 200+ years since. Also, there is no longer water connected to these boxes, so they cannot be used to restore HP, nor do they add RADs.

Firehose boxes are most commonly found in the old metro stations, but do appear in a few buildings around the Capital Wasteland as well.

They are found inside most of the buildings in the Mojave Wasteland.

Retrieved from "https://fallout.fandom.com/wiki/Firehose_box?oldid=2798359"
Community content is available under CC-BY-SA unless otherwise noted.