Fireflies are creatures found in Appalachia.

Found throughout Appalachia in small groups. Fireflies are an enlarged variant of their tiny pre-War insect counterparts.

Although appearing as enemies, fireflies are completely non-hostile and will flee from hostile creatures. They have very few Hit Points and no means to inflict damage.

The base variant of the firefly.

Fireflies appear only in Fallout 76. 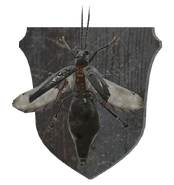 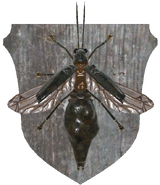