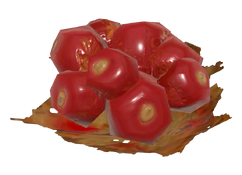 Firecracker berry is a consumable item in Fallout 76.

Firecracker berries are vibrant red berries that glow in the dark. They will start to rattle when approached by a player character. If left alone, they will explode, dealing fire damage, and cannot be gathered afterward. A firecracker berry is also needed for the Flavors of Mayhem quest for Rose.

When affected by an intercontinental ballistic missile event, firecracker berries will turn into bomb berries, which can be harvested for raw cobalt flux.

The firecracker berry is a mutated form of the real-world plant Cornus canadensis (Creeping dogwood),[1] which, unlike its Fallout 76 counterpart, does not explode if come into contact with.

Firecracker berries growing in the wild

Bomb berries in a nuke zone

Firecracker berries visible at night
Add an image to this gallery

Retrieved from "https://fallout.fandom.com/wiki/Firecracker_berry?oldid=3277307"
Community content is available under CC-BY-SA unless otherwise noted.