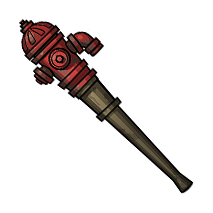 “Now you can pretend you're a tiny, underpowered Super Mutant Behemoth.”— In-game description

The fire hydrant bat is a weapon that appears in Fallout Shelter. It was added in the 1.6 update. It is the weapon with the highest maximum damage in the game, beating the Dragon's Maw's maximum damage by 2.

The fire hydrant bat is a melee weapon. Only a single dweller with a melee attack can attack a given opponent at any time. However, this will not preclude dwellers with ranged weapons from also attacking an enemy in combat with a melee dweller.

The Fire hydrant bat is a Legendary melee weapon. With a range of damage between 19 and 31, it has the highest maximum damage in the game, yet its minimum damage of 19 means that its average damage of 25 is 1/2 lower than the Dragon's Maw, another single-shot weapon.

A high Intelligence statistic is needed to effectively create the fire hydrant bat.