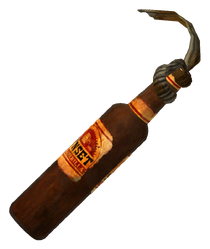 The fire bomb is a thrown explosive in the Fallout: New Vegas add-on Honest Hearts.

A Molotov cocktail made out of a Sunset Sarsaparilla bottle, filled with a flammable substance and stuffed with a rag to ignite it. It will also turn enemies into piles of green goo if the killing blow is a Critical Hit, similar to that of plasma-based energy weapons. This weapon qualifies as an improved holdout weapon.

Fire bomb in the perk image for Fight the Power!
Deutsch Русский Українська
Community content is available under CC-BY-SA unless otherwise noted.
Advertisement