Fire ants are creatures living in the Capital Wasteland in 2277. They are a variation of giant ants that have been genetically modified, and their name comes from their ability to expel a flammable acid from their mandibles.

This section is transcluded from fire ant. To change it, please edit the transcluded page.

The fire ants of the Capital Wasteland were created by a scientist named Doctor Lesko. The doctor was attempting to return giant ants to their normal size through genetic manipulation and accidentally created the fire ants. Dr. Lesko's ambition was to make the ants exponentially smaller through generations, meaning the offspring are born smaller than their parents for generations to come.[1] He reasons that one small tweak of an error has left the ants with a completely different mutation.[2] Lesko further explains that the ants breathe fire by expelling flammable venom from what was their venom sacks, then igniting it with a spark made by clicking their mandibles. He calls this process "pyrosis."[3][4]

Fire ants have a hard, red-orange carapace that protects their body from most environmental factors. They live in enormous underground colonies where they eat, sleep, and mate with the queen. Fire ants are omnivorous, either using their pyrosis to hunt and kill prey, or eating what little vegetation they can find, when necessary. 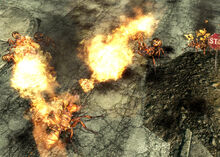 Fire ants like to attack from range with a fire breath attack, which has a surprisingly long effective range. The ants seem to have a minimum range at which they can breathe fire. If a character gets extremely close to the ants, they will constantly try to move backwards, letting off a spurt of flame or two. Additionally, they have a slow turn speed.

If their antennae are crippled, they will become frenzied. Once a fire ant becomes frenzied, it will attack other nearby fire ants and other non-player characters. Once attacked by another ant, the attacked ant will defend itself, damaging the attacking ant. When the frenzied ant kills something, the player character gains the appropriate Experience Points for that kill.

Due to their high resistance to fire, fire damage based weapons like the flamer and the Shishkebab will have little effect on them.

Fire ant soldiers are the second lowest ranked ant in a fire ant colony. Their job is to protect their area from intruders. They are very aggressive and will attack other creatures on sight. They are relatively easy to defeat at medium levels or with a well-equipped low level character.

Fire ant warriors are the predominant variety of ant the Lone Wanderer may encounter in Grayditch and in the Marigold station at higher levels. They have a high amount of HP and high attack damage.

Fire ant workers are the backbone for the ant community's infrastructure. As the name implies, they dig tunnels and care for the eggs. However, they will attack intruders if they are threatened. They are much weaker than any other variant.

Fire ant nest guardians are unique versions of fire ant warriors. There are only five of these ants protecting the queen. Doctor Lesko refers to these ants as "The Queen's Quintet."

This ant queen is found in the queen ant's hatchery. Like the others in the game, she is slow and has a ranged acid spitting attack that does a fair amount of damage. She cannot spit fire because Doctor Lesko's experiment affected only her eggs. The queen has a very high amount of HP and is considered a "boss" enemy in the game.

A flaming version of the globs of spit, exclusively for the Marigold fire ant queen.

Group of guardians protecting the queen