Fire ants are mutated insects found in the Mojave Wasteland in 2281.

It is not known exactly how fire ants came to be in the Mojave Wasteland. Their ability to breathe fire is similar to the fire gecko's ability.

Fire ants are large insects, covered in a reddish-brown carapace. They have large mandibles used for defending themselves as well as for hunting. Their long antennae protruding out of the head act like sensors, allowing them to sense more information about their immediate environment. They also have the unusual ability of breathing fire.

These insects may pose a significant threat if encountered early in the game, especially for lower-level characters. Hitting their antennae counts toward a Critical Hit and will also frenzy the ant. Fire ants use the same tactics as giant ants, swarming their foe. Fire and explosives-based weapons are generally ineffective when dealing with them, as they have a high Fire Resistance. They will sometimes ignore the player character and only attack when provoked.

The fire ant queen, or giant ant queen, is the largest creature in the Mojave Wasteland. Only one ant queen appears in Fallout: New Vegas, located in the ant mound south of the Allied Technologies offices and Camp McCarran, northwest of REPCONN headquarters.

Fire ant soldiers, or soldier fire ants, are the larger and stronger of the two fire ant variants. This ant often accompanies the workers in foraging.

Fire ant workers are the smaller and weaker of the two fire ant variants. They are responsible for gathering food and taking care of the young of the colony. 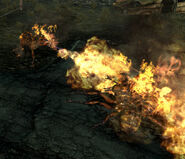 A fire ant in the Mojave Wasteland 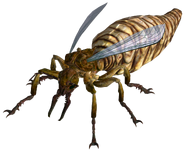