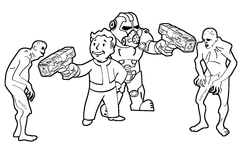 300+ XP
Brotherhood of Steel flag to craft in settlements

“We appreciate the assistance, civilian. But what's your business here?”— Paladin Danse

Fire Support is a Brotherhood of Steel main quest in Fallout 4.

While traveling near Lexington and College Square (or just south of the Corvega assembly plant if heading southeast from Concord), the Sole Survivor's Pip-Boy will pick up a military radio broadcast. It details a cry for help from the Brotherhood of Steel stationed at the Cambridge Police Station.

Head towards the location and the player character will be faced with a horde of feral ghouls attacking the Brotherhood members stationed there. Assist the soldiers and when the fight ends speak to the commander, Paladin Danse.

If the Sole Survivor agrees to assist him, the Call to Arms quest will begin. Alternatively, they can persuade Danse to hire them as a mercenary, resulting in a higher sum of caps for the same quest.

If one has completed The Nuclear Option in favor of the Commonwealth Minutemen prior to approaching the police station, and remain on amicable terms with the Brotherhood, Danse will instead gift the Sole Survivor his laser rifle and send them on their way.

Retrieved from "https://fallout.fandom.com/wiki/Fire_Support?oldid=3415957"
Community content is available under CC-BY-SA unless otherwise noted.