The Fire Root Cavern is a location in the Mojave Wasteland in 2281. The north entrance of the cavern is located southeast of Searchlight East gold mine and southwest of Smith Mesa Prospector Camp. The south entrance connects to the Cottonwood crater.

The cavern consists of one large room with a radioactive pool of water, and an adjoining corridor and overlooking ledge connecting two entrances (a lower entrance from the desert floor, and an upper entrance opening to cliffs and another outdoor pool of radioactive water). There is a hollowed-out rock to the left of the small narrow path leading to the lower entrance of the cavern. There are a few fire geckos inside, including the legendary fire gecko. Off the entry corridor, an evil gnome statue can be found. A skeleton and duffel bag are found near the southwest corner of the lower indoor pool. Finally, back outside near the upper entrance, a dead prospector can be found with various loot, including a Fat Man.

Fire Root Cavern is said to be the genesis of the fire geckos.[1]

The Fire Root Cavern appears only in Fallout: New Vegas. 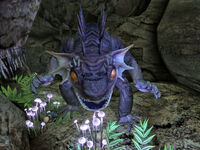