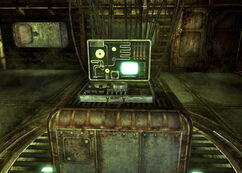 The Garden of Eden Creation Kit

Complete Finding the Garden of Eden

“The G.E.C.K. is in a chamber flooded with deadly radiation. I doubt you could survive inside very long. However, I can.”— Fawkes when asked about the G.E.C.K

Finding the Garden of Eden is the tenth main quest in Fallout 3. It is also a PlayStation 3 trophy and an Xbox 360/PC achievement.

Depending on your choice during Picking Up the Trail, you either have to fight your way through Murder Pass to the vault door and enter or talk to Joseph in order to hack the terminal to enter Vault 87.

Both entrances of Vault 87 lead to the Reactor Chamber. From there, you proceed to the Living Quarters, then the Test Labs. There, you eventually encounter and liberate a super mutant named Fawkes who asks to hold a conversation with you over the intercom. Fawkes explains his upbringing in the vault and how he has become intelligible and civilized through continued access to the vault's database. Fawkes promises to retrieve the Garden of Eden Creation Kit from the irradiated halls above if he is released.

The radiation level where the G.E.C.K. is stored is extremely high. You can proceed in one of two ways:

The room with the G.E.C.K. can be found by going left from Fawkes' cell. If you release him, he slowly leads you to it and will engage the remaining enemies in melee. Fawkes is even tougher in this part of the game than he is as a follower, so you shouldn't worry about him dying.

Once Fawkes is free, he will thank you and hold up his end of the bargain. He will proceed to slowly walk to the room with the G.E.C.K., fighting any enemy super mutants along the way. Once he's there, talk to him again to get him to retrieve the G.E.C.K. He can be watched through the windows as he does this, or alternatively followed (talking to him during this will yield an amusing comment). If you do not feel like waiting for him in real-time, a two-hour wait is enough to bring him instantly back to you.

However, if Fawkes is killed, the player character will have no choice but to retrieve the G.E.C.K. on their own. Fortunately, Fawkes is extremely tough - practically invincible - so the only way you'd find yourself in that situation is if you intentionally killed him yourself. If, after retrieving the G.E.C.K., Fawkes is engaged and killed before handing it over to the player character, it can be looted from his corpse.

After all this effort you will be incapacitated upon attempting to leave the Vault by a type of flash bang grenade, and Colonel Autumn will show up with some Enclave soldiers, and take the G.E.C.K. from you. You will pass out a few moments later. An exception to this is in the bugs section below.

If you are accompanied by a companion, they will not be with you after you have been incapacitated by the Enclave. Be sure to retrieve any equipment from them you do not want them to walk off with (as if they were fired) before this happens, or right after retrieving the G.E.C.K. You will not have a chance to re-hire your companion until after The American Dream. After re-hiring a companion they will have all the items you left with them still in their inventory, so it can be a good way to free up inventory space of non-essential items you want but won't need during your time in Raven Rock, allowing you to stock up on the mountains of Enclave gear.

A good way to regain lost items from your followers is to sneak attack them with the Victory rifle and take your stuff while they are down. This has no loss of Karma, nor will the ex-followers turn on you. You cannot take the armor off. This is useful when you had two followers from different Karma zones, and do not want to commit Karma giving deeds to reclaim your items.

The name of the quest is a play on words: not only that the player character searches for the Garden of Eden Creation Kit, but the quest also ends in finding the residence ("garden") of Eden.

Colonel Autumn's ambush
Add a photo to this gallery
Retrieved from "https://fallout.fandom.com/wiki/Finding_the_Garden_of_Eden?oldid=3452652"
Community content is available under CC-BY-SA unless otherwise noted.