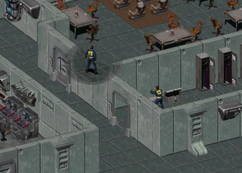 “Don't touch me! I don't have anything. Now leave me alone!”— Water thief

Find the Water Thief is a side quest in Fallout.

On January 5, 2162, the Vault Dweller is once again able to enter Vault 13. To receive this quest, they need to speak to one of the following people in the vault:

After speaking to any of the aforementioned individuals about the water thief, enter the room nearest the elevator on level three and stay there until midnight. A lone vault dweller will leave the elevator and walk around the level before entering the water storage room (the room with multiple lockers).

When the water thief exits the room, the Vault Dweller needs to confront him and insist on searching him. This requires the Vault Dweller to pass a Charisma check or he will attack. After the thief is searched, the player character will be taken immediately to the Vault 13 officer, who will thank them for their aid. This completes the quest.

The amount of experience varies based on how the Vault Dweller handled the situation:

Retrieved from "https://fallout.fandom.com/wiki/Find_the_Water_Thief?oldid=3273959"
Community content is available under CC-BY-SA unless otherwise noted.