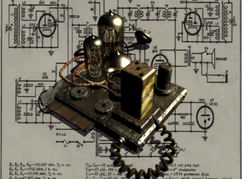 7500 XP
Removal of the time limit on the game

“Ah, you're here, good. We've got a problem, a big one. The controller chip for our water purification system has given up the ghost. Can't make another one, and the process is too complicated for a work around system. Simply put, we're running out of drinking water. No water, no vault. This is crucial to our survival. And frankly, I... I think you're the only hope we have.”— Jacoren to the Vault Dweller

Find the Water Chip is a main quest in Fallout.

Exit the cavern and travel towards Vault 15. Enter Shady Sands (there is a green circle denoting a location uncovered during the travel to Vault 15).

A rope will be needed to enter the next location, Vault 15. This is the initial reason for travelling to Shady sands. Ropes can found, and stolen, from more than one place in the town but can be purchased, or again, stolen, from certain traders; many of these traders are located in the Hub. However, Seth at the entrance to Shady Sands is the most convenient.

After acquiring the rope, go to Vault 15.

The entrance to the vault is hidden in the uninhabited shack. Open the hatch and descend into the vault.

There are a few giant rats and mole rats in the area. Head towards the broken elevator and use the rope on the shaft to descend to the second level.

Proceed to where the command center should be. Once it is in sight, 500 XP is awarded for verifying that it is not salvageable. To acquire the XP and the message that states the chip is elsewhere, reach the bottom right corner of the facility.

After coming out of Vault 15 empty handed, travel to the Hub. Ask Ian for directions.

Use the manhole to enter the sewers and proceed north through the sewers to the Watershed area. If the Vault Dweller takes this route, they will come across a group of friendly ghoul refugees and they can get information on the super mutants from their leader. After this, keep heading north through the sewers and climb up the ladder at the end. Find a building to the north with some super mutants and an imprisoned ghoul. In order to navigate the area without combat, either convince the super mutant leader Harry with a high Speech skill, sneak past or confuse him by having extremely low Intelligence. Violence is an option, but if one fails to achieve a peaceful solution, Harry will either attack or send the player character to the Mariposa Military Base.

After dealing with the super mutants, free the ghoul prisoner. If he lives, he will identify the entrance to Vault 12 in the adjacent cell. However, the entrance can be opened without speaking to him.

Ghoul sentries inhabit the vault area and are hostile during night time. Travel to the third level using the elevator, and enter the command center area. Remove the water chip from the computer, which also grants +3 Karma. Doing this will turn the ghouls in the vault hostile.

After obtaining the chip, head back to Vault 13 and give the chip to Overseer Jacoren.

After completing this quest, Overseer Jacoren will give the quests to Destroy the source of the Mutants and Destroy the Mutant leader.

Retrieved from "https://fallout.fandom.com/wiki/Find_the_Water_Chip?oldid=3449122"
Community content is available under CC-BY-SA unless otherwise noted.