Find Woody the ghoul for Percy. Try the Den 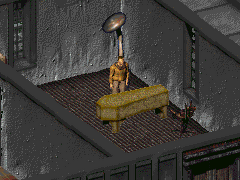 Find Woody the ghoul for Percy. Try the Den is a side quest in Fallout 2.

This quest is received in Gecko, at the Survival/Gear shop at the Gecko junkyard. Talk to Percy and he'll tell the Chosen One how he's worried about his friend Woody, who has disappeared. As the game recommends, go to the Den.

At the Den West Side, go to the guy that supposedly has an ancient Egyptian mummy, which is south, in the haunted house. Talk to him and pay $25 to have him show you the "mummy." One will recognize that the mummy is, in fact, a ghoul wrapped in toilet paper. Wake Woody up and tell him to run.

Retrieved from "https://fallout.fandom.com/wiki/Find_Woody_the_ghoul_for_Percy._Try_the_Den?oldid=2806032"
Community content is available under CC-BY-SA unless otherwise noted.