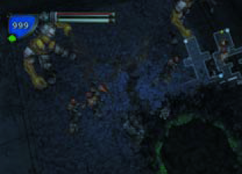 Find Mutants is a quest in Fallout: Brotherhood of Steel. It is given to the player at the West Bridge of Los.

Object is to find mutants somewhere in Los and see what they're up to. Talk to the ghouls on the Bridge and see if they can help you. Enter the East gate and make your way to the docks entrance. The path to follow has the form of a reversed S-shape, starting going east. Fight of ghouls and cross chasms using pipes to land on a small island in the east. Go west again manoeuvering past fences. By then you'll have made it to the southwest of the Bridge town. Round a fenced area and get ready for a bunch of pipe hops while getting rid of ghouls. Pick up valuable loot on a secret island walking the invisible path in the outer southeast. Backtrack and enter the Docks of Los.

Once on the docks, a similar S-shaped path has to be followed, starting at the northeast of the map. Go south until you encounter the first dock. Bend a curve around crates between the first and second dock and go north. Facing some thougher ghouls manoeuver your way around toxic puddles in the north area. While going south again you'll have to pass through a torture chamber. Exit it to face some more sludge, and make a small detour to the west to take out some ghouls behind fences to unlock a large glowing ghoul that drops the Slugger. Enter the warehouse district in the southwest.

In this district are the mutants you're after. To find them, go the only way possible, north, following a small curve through ghoul barricades. Kill them for some needed experience and make a U-turn. By then you'll be in the center of the district and can make the choice to go east to the holding pens and postpone finishing this quest and first free Rhombus, completing Find Brotherhood Paladins. Going south however, will result in encountering two super mutants, that once seen, will give the Initiate 400 Experience Points.

The door to the nearby Vault-Tec Warehouse will still be locked at that time. To get the key, first Rhombus has to be freed and Find the Secret Vault has to be started. When returning from the pens to the warehouse district, the mutants have respawned and one of them will have the key on him.

Retrieved from "https://fallout.fandom.com/wiki/Find_Mutants?oldid=2195429"
Community content is available under CC-BY-SA unless otherwise noted.