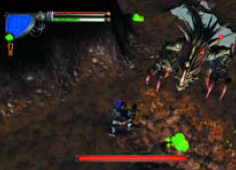 Kill the mother deathclaw and get the Laboratory keycard from her belly!

Find Laboratory Key is a main quest in Fallout: Brotherhood of Steel. It is located in the Secret Vault gardens.

After the auxiliary vents are opened, the Initiate returns to Patty with the good news and the dwellers start leaving the vault through them in order to escape the mutants. Patty is afraid the mutants will use the labs to construct new weapons, so the Initiate needs a way to get into the Secret Vault - Laboratories. The only key to it is in the hands of Dubois, a vault scientist. However, he is lost somewhere in the ruins and needs to be found. Patty gives the ruins keycard which opens the Ruins section.

From the Gardens, the Ruins One area is entered. Here, mostly normal and baby deathclaws are encountered and the area is a relatively easy pass. Pick up Mary's gold ring and return to Mary first, as soon it won't be possible to give it to her anymore. Ruins Two contains much more fearsome deathclaws; in the center room very large, pinkcolored deathclaws keep spawning. Bang the power box and shoot the switch through the glass window to open the room next to it. Progress your way to Ruins Three while picking up your first Bawls bottles.

Ruins Three is infested with large deathclaws and heavy duty weapons are needed to hold them off. Make a U-turn while picking up valuable weapons and ammunition like dual laser pistols, a minigun and heavy energy cells. After slaying a last group a pink deathclaws, enter the caves and meet with Dubois. He fears for his life from a mother deathclaw. Unfortunately, he is but all too right, the deathclaw knocks the Initiate unconscious and devours Dubois, with the key.

Obviously, she won't give up the keycard freely, so enter the boss fight with her. During the fight, she will retreat to goo puddles to heal if she's hurt badly. Once killed, the laboratory keycard drops on the ground. Take it back to the Gardens, which will now be a totally different sight. Mutants have taken over, with dwellers running and Ching Tsun making a final stand. Patty and Mary are also gone.

Retrieved from "https://fallout.fandom.com/wiki/Find_Laboratory_Key?oldid=2786741"
Community content is available under CC-BY-SA unless otherwise noted.