“You sure came a long way to rob this place. Guess greed is in the blood.”— Dean Domino when first meeting The Courier and being a companion

This quest is one of three given to the Courier after completing the quest Sierra Madre Grand Opening!. Speaking from the hologram fountain at the center of the Villa, Father Elijah instructs the player to recruit three companions, including Dean Domino, in order to carry out a heist at the Sierra Madre Casino & Resort.

If you have at least 50 Lockpick skill and enough health to run through a toxic cloud, you can reach Dean almost immediately by opening the locked gate at the end of the alley directly south of the entrance from the Villa. The first toxic region you find beyond the gate, with two staircases in front of you and at least one ghost person, is NOT the way to reach Dean, only a treasure trove that you should loot after Dean joins you and provides the Unclean Living perk. Instead, when you see the area described, turn right (south) and follow the sheltered awning until you see another passage leading to the right (west). There will be another corridor leading south that is filled with toxin. Run down that, and you will reach Dean's demesne.

Lacking the required skill, it will be necessary to run the gauntlet of Dean Domino's traps. The street leading to the right in front of the stairs you see when you first enter the Residential District, and the makeshift walkway to the left at the top of the stairs, lead to side rooms with a few supplies, guarded by a ghost people variant and a shotgun tripwire, respectively. The doorway leading right from the top of the stairs has a pressure plate that triggers a double shotgun trap. Inside the room is an armed frag mine, and the doorway on the other side is guarded by a tripwire-activated grenade bouquet.

The doorway opens out to overlook a large enclosed courtyard, easily reached by descending the stairs to a smaller courtyard. However, the large courtyard is filled with toxic gas, and watched over by a Ghost Person that remains in one place (second floor balcony, the very center of the opposite side of the courtyard). The courtyard itself holds a treasure trove of energy weapon ammunition, marked by a convenient glowing package of Rad-Away, but gathering it without Dean's help is almost certain to drain your health dangerously low. The cloud doesn't extend to the area under the awnings of the buildings surrounding the courtyard, though, and directly under the Ghost Person on the second floor you'll find a storage area guarded by a frag mine, containing one of Dean's stashes.

To continue toward Dean, you must climb the staircase at the entrance of the toxic courtyard, leading to a room that opens onto the courtyard balcony. There is a tripwire that triggers a grenade bouquet in the doorway to the room. The balcony is too narrow to sneak past the Ghost Person, even using a Stealth Boy, so be ready to fight. Once completely around the balcony, another door leads to a pressure plate that sets off a shotgun trap. This trap is aimed at a fire extinguisher in the doorway, which explodes violently when shot.

From the next room, there are two poison-free paths that can be taken through the toxic cloud covering the alley. One is down a staircase from the room with the bed in it, the other is out onto a balcony from a second room reached from a hole in the wall of the first. This upper path has more traps than the lower path and can only be safely used in one direction, but it does allow the player to easily ambush a ghost person waiting at the end of both routes, while the lower path forces the player to walk down a hallway the ghost person is watching directly, and may require a Stealth Boy to achieve a sneak critical.

Once you reach the area with Dean, you will start hearing him speaking to himself. Continue to the end of the street to find the stairs to Dean Domino around the last corner. Continue up until you find Dean, drinking a Sierra Madre martini and enjoying the view of the Residential District through his makeshift bay window. He won't talk to you until you sit in the chair next to him, so you must sit on his obvious trap and hear him out.

During the conversation, you will have several opportunities to make skill checks to guide the conversation. However, if you want to avoid having to kill Dean in the finale, you must NOT choose the Barter based conversation option (Dean will laugh off your display of excessive knowledge here, but he will neither forget nor forgive it later). There is no consequence in succeeding on either the Explosives or Speech check. You will also have to avoid the insulting or aggressive standard replies, and essentially agree to be his obedient errand boy, if you want to have a chance to save him from his own madness. Looting his stashes while he is present will not turn him against you.

If your Explosives skill is at least 30, you can disarm the five grenade bouquets Dean has set up in the Residential District. This will give you 15 frag grenades, which will be very useful in destroying hard-to-reach hologram emitters that you come across (such as during the quest: Heist of the Centuries).

Once you get Dean Domino to join you, be sure to travel around the Residential District and loot it thoroughly. In particular, the center of the large courtyard and the area behind the locked gate (accessible through the toxic hall north of where you meet Dean) have enough supplies to keep even Hardcore characters going for quite a while. 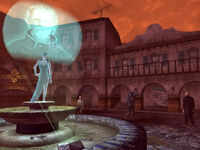