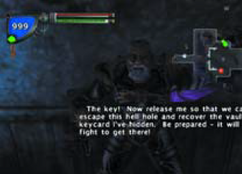 Asking around town leads to little information until talking the Mayor of Carbon, Richard.

This section is transcluded from Kill Warehouse Radscorpions. To change it, please edit the transcluded page.

Richard claims to know the whereabouts of the Brotherhood of Steel Paladins and tasks the Initiate to clear the radscorpions from the Carbon warehouse before he will provide the information. As the Initiate is dependent on others to go anywhere in the game he must complete this task.

This section is transcluded from Kill Mayor. To change it, please edit the transcluded page.

After a task to gain the Mayor's trust, Richard informs the Initiate that the Paladins went into the Carbon Crater and gives the Initiate an elevator key to go in after them. The Initiate must then search the crater for the Brotherhood, a quest that ends in futility. At the bottom of the crater the player finds that the information provided by Richard was false.

Running out of leads the Initiate eventually makes his way to the Carbon Mill and the raider Matron, Jane, where he witnesses a discussion between her and the super mutant Attis.

This section is transcluded from Defeat Raiders. To change it, please edit the transcluded page.

After witnessing the confrontation between Jane & Attis the Initiate will be spotted by Jane, she will then challenge the Initiate about destroying her soldiers. During the Initiate's questioning, she will claim to be working for the Brotherhood of Steel, saying that she is offering information on Attis' army in exchange for protection and the Brotherhood turning a blind eye when it comes to her dealings with the townspeople and the mutants. She mentions that after her meeting with the Brotherhood that they went on to pursue the Mutants in a ghoul city, later revealed to be Los.

Once the Initiate travels to Los, they follow the lead from Jane that the Brotherhood are seeking out the super mutants to defeat them. They search Los for the Brotherhood Paladins, but finds only Rhombus still alive.

Retrieved from "https://fallout.fandom.com/wiki/Find_Brotherhood_Paladins?oldid=3024769"
Community content is available under CC-BY-SA unless otherwise noted.