Find Badger's girlfriend in the hold below the ship 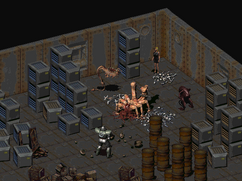 Be a knight in shining armor

5000 XP
Can speak to A. Ron Meyers
An option for The tanker needs fuel

“You gotta do me a favor, first. My girlfriend got herself lost in the tanker. Find her for me and I'll do it.”— Badger

Find Badger's girlfriend in the hold below the ship is a quest in Fallout 2.

To get fuel for the tanker for you, Badger first asks to do him a big favor: his girlfriend Suze got lost in the tanker and probably wandered into its monster-infested hold. So, she must be found and rescued before anything happens to her.

Alternatively, this is one way to convince the tanker's captain of your trustworthiness.

There are two ways into the hold: through the corridor with two doors along the northern edge of the map and by the ladder right behind Badger.

It's a fairly straightforward assignment, but can be tricky, as the monsters (centaurs, floaters and aliens) wander all over the lower deck and can reach her if you're not fast enough. Suze is nothing special and will die fast.

The easiest way is to get into fight before any of the monsters spot her so they all go after you instead. This is trivial since they attack on sight anyway.

Once the player returns Suze to Badger, he offers his services as a hacker. Should Suze be killed in the rescue attempt, Badger will still provide you with his services, but he'll need a few hours to come to terms with his grief first.

To ask Badger for his services, one must already have The tanker needs fuel quest - that is, have spoken to the Captain (unless they found the other way). Fortunately, it's possible to rescue Suze without taking the quest - the reward will be received anyway.

Retrieved from "https://fallout.fandom.com/wiki/Find_Badger%27s_girlfriend_in_the_hold_below_the_ship?oldid=3418822"
Community content is available under CC-BY-SA unless otherwise noted.