The fighter jet is a vehicle in Fallout 3, its add-on Point Lookout, and Fallout: New Vegas.

A jet utilized by the United States Air Force before the war. It was one of several aircraft that was part of an exhibit at the Museum of History.[1] Some variants are found with folding wings.

The fighter jet strongly resembles the P-80/F-80 Shooting Star and its variants, manufactured by the real world Lockheed Corporation.

Another view of the jet

Fighter jet hanging from the ceiling

Statue of a fighter jet at Adams Air Force Base 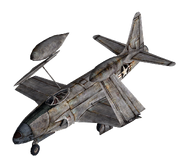 Fighter jet with its wings folded up