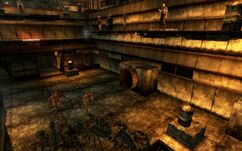 “What's the name of your deathwish?”— Red Lucy

Fight Night[1] or The Thorn Mayhem (GECK name) is an unmarked quest in Fallout: New Vegas.

In the middle of The Thorn is a large arena, and surrounding the sides are cages with wasteland creatures grown & kept by Red Lucy for arena battles.

One can set up custom fights by talking with Red Lucy and choosing which creatures and raiders fight in the next match, along with how many of them will fight in a red vs. blue team. Since the creatures are expensive to breed, and there's only a limited amount of Fiends to keep and maintain, one will have to entirely pay for the custom match. If the team bet on wins, an earnings of varied caps will be rewarded, plus a little extra. To initiate the fights, one simply talks with Red Lucy and selects the dialogue: Let's talk about The Thorn. and ask, What's fighting in the next match?. The team bet on is the first one that comes up in dialogue, and it is always on the left. Red team is on the left, blue on the right.

One can also tell Red Lucy that they want to fight against the creatures themselves. After choosing whether to fight certain creatures or Fiends and how many of them to fight, the combatant will then be sent to the arena cage. The winnings payout is according to which creatures or Fiends are fought: 3 deathclaws will award 500 caps, while 3 giant mantises will only award 30 caps.