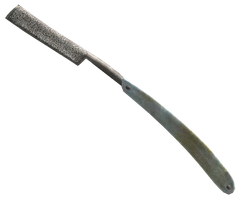 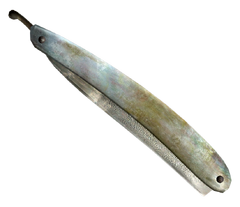 Figaro is a weapon in Fallout: New Vegas.

A unique variant of the straight razor, Figaro features a slightly tarnished metal handle with a polished silver blade decorated with ornate etchings. It counts as a holdout weapon, and therefore can be smuggled into casinos and the Fort. Boasting superior damage and critical damage, it offers faster attack speed and double the critical hit chance compared to the standard straight razor.

Figaro has a special Back Slash attack that does 70% damage in V.A.T.S., at the cost of three fewer action points (requires a Melee skill of 50).

It is possible to execute a Back Slash outside of V.A.T.S. (without the required Melee skill of 50 to perform the move), by initiating a power attack while moving forward.

Figaro can successfully strike about 445 times from full condition before breaking.

Found on Sergio, who is inside the King's School of Impersonation, in which it can either be looted from his corpse, or obtained via reverse-pickpocketing.

The name is a reference to the opera The Barber of Seville, where the protagonist is a barber named Figaro.