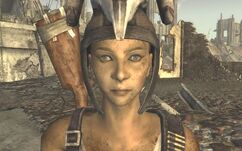 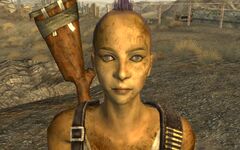 The boss without her helmet

The Vault 3 Fiend boss (simply called Fiend in-game) is a high-ranking member of the Fiends gang in the Mojave Wasteland in 2281. She is a unique, boss-type Fiend.

She seems to be responsible for helping to watch the place and acts as Daniel's bodyguard.

Located initially near Daniel in Vault 3's living quarters, she patrols the general interior of Vault 3 near the cell containing the gang's hostages.

The Vault 3 Fiend boss appears only in Fallout: New Vegas.

Retrieved from "https://fallout.fandom.com/wiki/Fiend_boss_(Vault_3)?oldid=3173623"
Community content is available under CC-BY-SA unless otherwise noted.