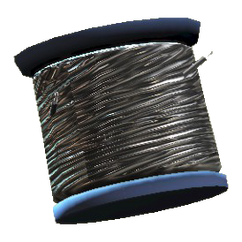 Plasma mine
Pulse mine

Fiber optics is a crafting component in Fallout 4.

Thin, flexible fibers made of high-quality glass, used to transmit signals more efficiently than with metal wires. In-game, fiber optics are a key component to high-tier electronic weapon modifications and settlement devices, such as laser turrets. With the Contraptions Workshop add-on, they can be used to produce energy weapons on the energy weapon forge.

Retrieved from "https://fallout.fandom.com/wiki/Fiber_optics_(Fallout_4)?oldid=3433064"
Community content is available under CC-BY-SA unless otherwise noted.