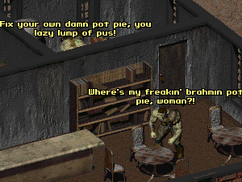 “I told you to stop eating that iguana-on-a-stick! Open a window! Augh!”

The feuding couple (spouse) are super mutant residents of Broken Hills in 2241.

The man of the house wants his brahmin pot pie. The female of the house is not very happy and has thrown away a Cat's Paw magazine, presumably in revenge for the iguana-on-a-stick farts the man keeps inflicting on her.

The husband will ask the Chosen One to leave their house using the derogatory term "pinkie," while the wife mentions she will one day abandon him. The Chosen can capitalize on their argument by acquiring the Cat's Paw magazine she threw away.

* Only on the male mutant.

The feuding couple appears only in Fallout 2.

Retrieved from "https://fallout.fandom.com/wiki/Feuding_couple?oldid=3328835"
Community content is available under CC-BY-SA unless otherwise noted.