Fetch the cable for the heavy lift 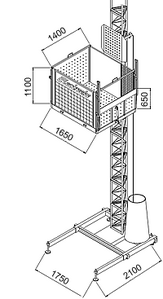 Fetch the cable for the heavy lift was going to be a quest in Van Buren, the canceled Fallout 3 by Black Isle Studios. It is located in the Reservation.

The heavy lift for the equipment elevator on Sub-Level 3 is not working because it needs a new cable. Willem will request that the Prisoner try and find a replacement cable for the elevator as a side to establishing friendly liaisons with outside human communities. The cable may be found in Denver or Hoover Dam.

Yep, this is a fetch quest, but it is optional, and has far reaching repercussions. Retrieving the cable will allow Nuclear Nellie to be transported to the surface and mounted to the flatbed car for future use (see Colonel Green's Quest).

Retrieved from "https://fallout.fandom.com/wiki/Fetch_the_cable_for_the_heavy_lift?oldid=2810697"
Community content is available under CC-BY-SA unless otherwise noted.