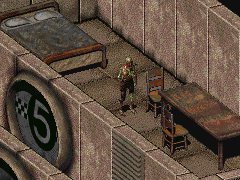 “Well, I supervise the atomic power plant. Really, though, I run the whole thing by myself.”

Festus is a particularly unkempt ghoul who lives in Gecko, where he serves as the manager of the nuclear power plant there.

Festus is a glum looking ghoul with a particularly rancid appearance, who smells like an infected wound.[1] Opinions of Festus differ from one person to the next. In his own eyes, Festus is an atomic power genius and all-around renaissance man, undervalued and misunderstood by the world at large. In the eyes of most others however, he is an unkempt, half-competent plant technician with a massively inflated ego. Festus is competent enough to install a hydroelectric magnetosphere regulator, but he attempts to dodge this and many other responsibilities by claiming that his time is too valuable to waste on such trivialities (while simultaneously, of course, claiming that he is the only one in Gecko who could possibly do such a thing right).

Festus appears only in Fallout 2.

Retrieved from "https://fallout.fandom.com/wiki/Festus_(Fallout_2)?oldid=3327438"
Community content is available under CC-BY-SA unless otherwise noted.