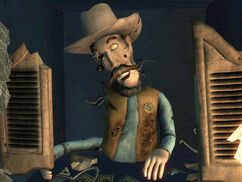 The Legend of the Star
A Valuable Lesson

“Wahoo, you did it pardner! Bully for you! Ol' Festus knew you could do it. I suppose you'll be wanting that prize now.”

Festus is an animatronic automaton made by RobCo Industries, designed as an interactive display for visitors and tourists takes away some the mystique.[2] Unlike most other robots in the wasteland, who operate with a degree of autonomous artificial intelligence, Festus is a simple machine that only responds to a set of about a dozen designated command phrases and answers with pre-recorded responses.[3] Such as the reluctant case with advisory about drinking too much Sarsaparilla that was broadcast on channel 6 television.[4]

Before the Great War, an urban legend circulated that if anyone collected enough specially marked bottle caps and took them to the headquarters building, they would receive a prize. The legend has persisted after the war, becoming a grandiose wasteland legend. One where Festus is a centuries old guardian of the Sunset Sarsaparilla treasure.[5]

Festus is still operational with centuries of wear and tear, despite his wooden cabinet having been shot several times, breaking the front glass window and taking his right arm and right eye. Festus' speaker is also damaged, shifting in quality and volume as the prerecorded lines are played.

If the dialogue option "I Feel Lucky" is chosen, the Courier has the option to play a variant of blackjack called Lucky Horseshoes. Festus can be asked for instructions on which buttons perform which action.

Festus is a reference to the character Festus of the 1952 radio and 1955 television Western drama series Gunsmoke.