Feral ghouls are found all over Appalachia, and are hostile to the Vault Dweller. They wear distinguishable clothing such as work clothes, police uniforms, and professional wear rather than just indeterminate rags. Some feral ghouls have area-dependent apparel, such as feral ghouls wearing golf outfits at the Whitespring Resort. Unlike the Scorched, which have retained greater cerebral functions and motor skills, feral ghouls are unable to use weapons due to the loss of mental and motor functions associated with their feral state.

Feral ghouls were formerly humans who suffered mutations due to radiation, including brain decay, resulting in complete loss of reason due to diminished mental functions. Their skin is slightly decomposed and their hair has almost disappeared. They live in groups wandering in nature or human infrastructures in search of future prey, whether human or animal, to feed on their flesh. It is rare to see ghouls wandering alone and the presence of a single ghoul is a sign of the presence of other ghouls in the vicinity. Sometimes a group of ghouls can be accompanied by a wendigo. The ghouls are friendly to the wendigos and show no sign of aggression towards them.

Ghouls have a natural resilience to the Scorched Plague.

Feral ghouls will attack most other creatures they encounter, with the exception of wendigos. They will attack charging and striking their opponents. Their attacks are always accompanied by radiation damage, with glowing ones inflicting increased radioactive damage. Withered, gangrenous and diseased (

) feral ghouls will also deal poison damage. All ghouls have a flat 15% chance to transmit rad worms to the player character on-hit.

Ghouls often prepare their attacks by advancing slowly towards their opponent before running very quickly (often faster than the player character) and throwing themselves at their target in an exaggerated lunge. When adjacent, ghouls will perform a single and multi slap attacks. If downed by a multi slap, the remaining slaps will execute them.

Always appears during the Heart of the Swamp public event where they are called as reinforcements for the strangler heart. Each regular non-glowing feral ghoul variant has a corresponding strangler variant with the same stats, abilities, and items.

Feral ghoul officers were once high-ranking officers in the United States Armed Forces, responsible for carrying one of eight launch code keys needed to launch a nuke from Appalachia's nuclear missile silos. They can be identified by unique radio packs on their back, emitting both red light and a high pitched tone that sound off in a regular sequence. They may also carry a nuclear keycard. Each regular non-glowing feral ghoul variant has a corresponding officer variant with the same stats, abilities, and items.

Another variant of the golfer feral ghoul

Feral ghoul in a firefighter uniform

Feral ghoul in a U.S. Army uniform and combat armor

Feral ghoul in a miner's uniform 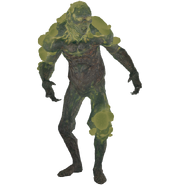 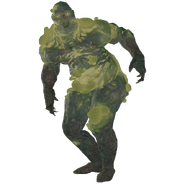