This section is transcluded from feral ghoul. To change it, please edit the transcluded page.

The brain structure of a feral ghoul indicates that the regenerative ability of the neurological system that affords "normal" necrotic post-humans their longevity does not extend into the higher reasoning functions of the brain itself. This condition is referred to as "ferocious post-necrotic dystrophy," according to the ghoul physician Dr. Barrows. Despite the apparent lack of the higher reasoning they once had as humans, some are capable of semi-intelligible speech, as the Vault 34 security officers will occasionally growl out understandable phrases similar to the trogs of The Pitt, indicating that their vocal cords and their brain's speech centers are still relatively intact.

Dr. Banfield supports the theory that all ghouls will eventually become feral ghouls, however, it should be noted that he has never taken the time to actually study a ghoul, and is biased against them. It should also be noted that many of the ghouls in existence were born prior to the war and have yet to go feral, making it quite possible that this theory is inaccurate.

Just like regular ghouls, feral ghouls do not require sustenance in order to survive. They do seem to feel hunger, however. When unable to find food, they will often go into a hibernation-like state, lying on the ground indefinitely until disturbed by movement or noise.

As with normal ghouls, ferals are not only extremely resistant to radiation, they are actually healed by it, as can be seen when a glowing one uses its radiation blast nearby other ghouls. M.A.R.Go.T. also states that feral ghouls have no internal body heat.

The feral ghoul reaver of the Mojave is a far less potent combatant than those of the Capital Wasteland. Instead, New Vegas reavers are more comparable to the other feral ghoul variants, as they no longer possess the radioactive gore grenade attack, their lunges do not cause as much knockback and they no longer emit radiation.

These ghouls are found often at higher levels, and at locations where the concentration of radiation is strongest. They have significantly more health and damage than the average feral ghoul. This variant, on death (and while attacking), gives off a small amount of radiation. Its secondary attack is when it stretches its arms to the sky then gives off a burst of radiation. In some cases, the ghoul might kill any ghoul in his close proximity to regenerate health to his own.

Like the vault security guard, they are the remains of the Vault 34 security team. However, they have become glowing ones which are notably stronger. While in combat, they may produce a pulse of radioactive energy. 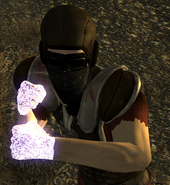 Ghouls attacking in Vault 34
Add an image to this gallery

Retrieved from "https://fallout.fandom.com/wiki/Feral_ghoul_(Fallout:_New_Vegas)?oldid=3205767"
Community content is available under CC-BY-SA unless otherwise noted.