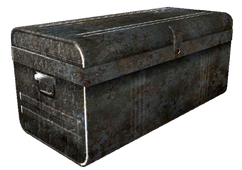 Felicia is a cut non-player character still present in the game's files of Fallout: New Vegas in the form of a merchant's container and a reference in a script.

Based on the resources which remain relating to them, she was in some way tied to the Sunset Sarsaparilla headquarters, and possibly the quest The Legend of the Star. In particular, the script which controls the more general dialogue surrounding the Sunset Sarsaparilla Headquarters includes a section, now empty, which is described as containing variables for Felicia.

The contents of Felicia's merchant container are as follows:

This container is set to respawn, possibly indicating that Felicia was intended to be a more permanently located non-player character or able to be encountered multiple times.

Felicia was added during the development stages of Fallout: New Vegas, but was cut from the final retail release of the game.

Retrieved from "https://fallout.fandom.com/wiki/Felicia?oldid=3208648"
Community content is available under CC-BY-SA unless otherwise noted.